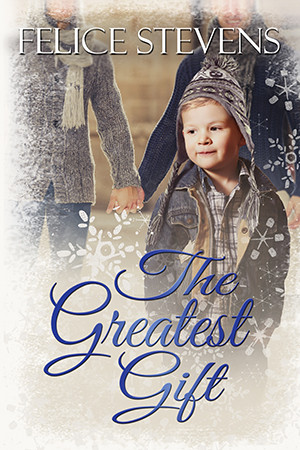 Rafe squinted into the sun. “Why don’t you wait here and I’ll get us some waters.” He gave Alex a kiss on the cheek and whispered in his ear. “You look happier than I’ve seen in months.”

He contemplated Rafe’s words as he and Dylan waited in line. He was happy. For these few short hours he let the draining world of the hospital fade from his mind and concentrated only on the dreams and wishes of a little boy who unknowingly was about to face the most tragic loss anyone could imagine.

“Are you cold, Dylan?” It was warmish for early November, especially in the sun, but Alex wasn’t sure if the little boy needed a hat. And to have his jacket zipped up all the way.

“Nooo.” Dylan wriggled away from Alex’s fumbling with his zipper. “Don’t.”

“Okay, don’t let go of my hand though. There are too many people and I don’t want you to get lost.”

The woman in line behind him with her two daughters smiled at him with approval. “I wish my youngest would listen to her father the way your son listens to you.”

At that moment Rafe joined them and when he handed Alex his bottle of water, his wedding band flashed in the sun.

“Hi. Sorry it took me so long. I got Dylan a snack. They have these cut up apples and carrots I thought he might like.”

While Rafe opened Dylan’s water bottle for him and opened the bag with the fruit and vegetables, the woman continued to talk to Alex.

“Well, I hope the two of you plan on having children because you certainly seem to have the situation under control and that’s not easy at all with an active little boy.”

Before Alex had a chance to respond, the line surged forward as the next round of people were allowed inside the camel riding area. Remembering the point of this outing was for Jude to see her son happy and secure, Alex lifted his backpack off his shoulder and pulled out his iPad, swiping at the screen until he came to the camera icon. He turned on the video and started filming.

“Dylan,” he called, waving his hand. “We’re making a movie for Mommy. Wave and say hi.”

At first Dylan was a bit hesitant; he said nothing and gave Alex only a quick little wave. But once he was lifted onto the camel’s back, his natural exuberance burst through and he screamed with laughter. Alex got it all; the camel handler adjusting Dylan’s harness on the saddle, Rafe’s protective hand on Dylan’s back making sure he didn’t slip to one side, but most of all he caught the uninhibited joy of a little boy who was having the time of his life.

When Dylan’s time was over and the handler was about to unbuckle his seat belt, the woman who’d been behind them in line walked up to them.

“Would you like me to take a picture with the two of you and the little boy?”

“Thank you. That would be great.”

She took the iPad, and he and Rafe posed on either side of a smiling Dylan.

“Here you go. I took more than one so you have some to choose from.” She put her hand on Dylan’s cheek. “Aren’t you the lucky little boy who has such nice men to take to the zoo!”

“My mommy’s sick and Alex is her doctor so she said he could take me.” Dylan wriggled down into Rafe’s arms. “Can we go see the elephants now?”

Alex and the woman shared a look.

“Alex, come on.” Now Dylan was on Rafe’s shoulders. “Me ‘n Rafe are gonna play horsie.”

“God bless you.” She hurried off to put her children on the camel ride, leaving Alex standing alone with an aching heart.